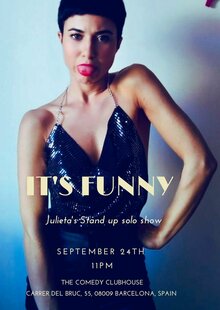 Julieta Degese is a stand up and improviser based in Berlin, Germany. She produces and hosts shows such as "A quirky Quomedy show” (Stand up showcase in English) and "La Previa" (Varieté show in Spanish).

Originally from Buenos Aires, Argentina, you can find her doing comedy in Europe and USA in Spanish, English and German!

Very funny according to her mother! Her humour has a lot of sexy hard truths and a lot of kooky shenanigans .

Ver detalhes
We and our partners use our own and third-party cookies in order to offer you the service in a correct way, measure the visits made to our website and, in specific cases, show you advertising and allow you to share content on social networks. You can obtain more information about cookies by consulting our Cookies Policy. To continue browsing you must accept all of them or you can reject here measurement and marketing cookies.
Refuse